The concept of pretrial release originated based on the premise that the poor and indigent were being penalized because they could not afford bail and therefore were being held in jail longer than those who could post bail right away.

By establishing a pretrial release program, each defendant is "screened" in an effort to make a more informed decision about wether the defendant poses enough of a threat to warrant the bail that was imposed.  While the concept is understandable, it already exists.  "Bail hearings" are typically held within 24-48 hours after incarceration.  During a bail hearing, a judge can hear arguments from both the defense and the prosecution, as well as the defendants family and from any other source that can offer evidence as to why the defendant should or should not have a change in his bail.  Judges have the power to ROR (release on own recognizance) defendants and do so at their discretion.

The issue was never monetary.  The issue was never bail.  The issue began because the judicial systems failure to function quick enough to do what they were designed to...charge/bail/bail review/release.  Due to the efforts of the Vera Institute and their brainwashing our legislators, they came up with a "risk based analysis" that incorporates a computer model to determine the likelihood of a defendants failure to appear and risk of committing a new crime.  This was never a problem...but now it is for the taxpayers.

The issues with Pretrial Release and the companies that maintain the programs are many.  From the design and fairness of their process to the effectiveness...there is a plethora of problems.  That said, two problems are the most relevant...

1.  Accountability - Pretrial release programs have ZERO accountability if a defendant fails to appear, commits another crime, or adheres to any court ordered conditions of bail.  ZERO.  Why have a program in place that has no accountability?  Anyone see a problem with this?  The accountability for commercial bail is big.  Not only are private surety's responsible for the monitoring of defendants and their appearance to any and all court appearances, should they fail to appear...private surety is on the hook for the entire face value of the bond.  100% accountability.  100% of the time.

2.  Cost - The cost for funding pretrial release programs are enormous...to the tune of MILLIONS.  Pretrial programming and software, staff, more judges, more prosecutors, more space, overtime...the costs are everywhere.  The pretrial program supporters want you to believe that a reduced jail population will make this up.  That's false...and they know it.  A system where everyone who is arrested must go to jail for up to 48 hours will increase the population, not decrease it.  Thousands of people are released on their own or by posting bail (using a bondsman or 10% option) before they go to the jail everyday.  The taxpayers of New Jersey are slated to spend roughly 50+ MILLION on this program.  In addition to that, those offenders that fail to appear, will have to be recovered by your local police and fugitive teams.  Who pays for this?  Yep, you guessed it...the taxpayers.

So what does Private Surety Bail cost the Taxpayers?

The cost to taxpayers for private Surety Bail?  ZERO

The cost to taxpayers for fugitive recovery?  ZERO

The cost to monitor each defendant?  ZERO

The penalty for the private commercial bondsman that does not recapture their fugitive?  The FULL face value of the bond.

​Understanding the birth and history of bail reform and pretrial release is an important part of understanding its failures.  The following is an excerpt from Aboutbail.com published in 2008.  Even in its infancy, the signs were there...

According to The New York Times, the United States and the Philippines are the only two countries in the world with a dominant commercial bail system. In the past 40 years, the commercial bail system has come under intense scrutiny, as critics claim pretrial release should not be based on a defendant's ability to pay a bail agent. The rise in anti-commercial bail sentiment has been accompanied by a wave of bail reform law, most commonly in the form of pretrial release programs run by the courts. Pretrial release programs have also been seen as a solution to overcrowded jails, a result of mandatory sentencing guidelines and three strike laws.

History of Pretrial
Pretrial release programs began in 1961 with the Vera Institute's Manhattan Bail Project. Candidates to be released before their trial sans bail were carefully vetted to ensure their stability and ties to the community. Due in large part to the success of the Manhattan Bail Project (the failure to appear rate of defendants released on their own recognizance [ROR] was comparable to the failure to appear rate of defendants released on money bail), President Lyndon Johnson signed into law the Federal Bail Reform Act of 1966, which set ROR as the de facto form of pretrial release as long as a person was not found to be a flight risk. While this only applied to federal cases, many states created similar bail reform laws. With these laws, pretrial release was born.

Effectiveness of Surety v. Non Surety Release
As discussed in the first part of this series, the selection process for pretrial release programs has become less arduous. As more people are declared eligible for pretrial release programs, the failure to appear rate for these programs has soared above that of people released on surety bail. In November 2007, the US Department of Justice released a special report from the Bureau of Justice Statistics entitled, "Pretrial Release of Felony Defendants in State Courts". As an unbiased third party, the Department of Justice determined that of all defendants released through some type of pretrial program, 28 percent failed to appear in court. 19 percent of defendants released on surety bond failed to appear, compared to 30 percent released on an unsecured bond. After a year, only three percent of defendants released on surety bond were fugitives, compared to ten percent of those released on unsecured bond. The Pretrial Justice Institute refutes that this study promotes surety bail as the best method of pretrial release. In their Fact Sheet "Understanding the Findings from the Bureau of Justice Statistics Report: Pretrial Release of Felony Defendants in State Courts", the PJI asserts that the study done by the Department of Justice was "not designed to answer the question of effectiveness. To evaluate the effectiveness of one release type over the another requires controlling for all the factors that might influence how release decisions are made and how defendants perform while on release." However, it can be argued that comparing statistical data regarding failure to appear and fugitive rates for those released through various pretrial methods does answer the question of effectiveness, even if not designed to do so. Further, in a private study that was designed to answer the question of effectiveness of pretrial release methods, the same conclusions were reached.

Other arguments for and against
As the PJI mentions, "the value of these release types can be judged by other factor: do we want to continue to allow potentially dangerous defendants to buy their way out of jail? Do we want to low risk indigent defendants to take up expensive jail space because they cannot afford the services of bail bondsmen?" While these focus on the monetary argument against surety bail, these questions do not focus on another issue with pretrial release programs - some assume you are guilty before being proven so. Ironically, this is one of the issues pretrial release programs were supposed to mitigate. Candace McCoy emphasizes this in her review of Caleb Foote's ideas of criminal justice, focusing on the pretrial program in Philadelphia that included "Treatment Courts." In these Treatment Courts, judges would release defendants without bail who agreed to weekly monitoring and drug testing. McCoy expresses the double standard in this practice, saying, "In the name of humane reform of bail practices and therapeutic help for druggies, the Philadelphia courts have designed a system in which an entire class of offenders are subjected to intrusive state control while on release and while they have not been convicted of anything (emphasis author's own)." Even advocates of pretrial release cannot help but admit the flaws inherent in the system. 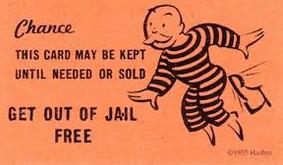